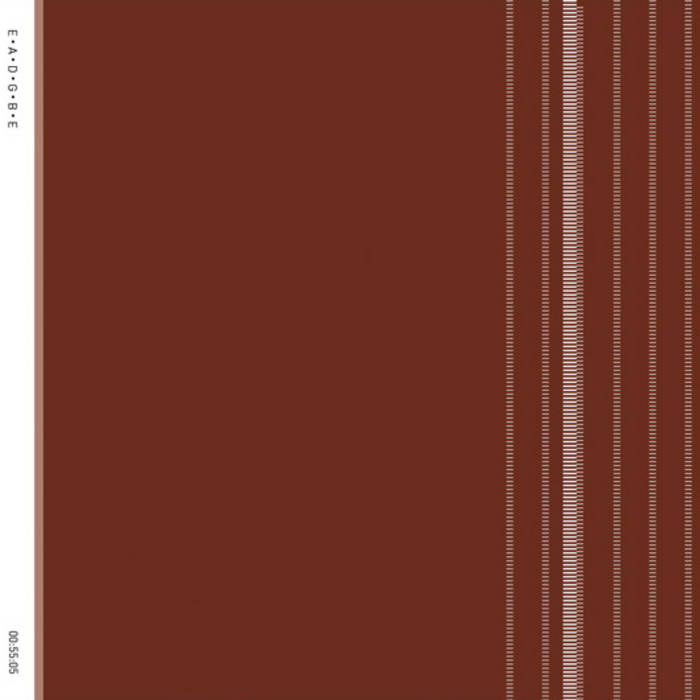 "Seven Machines for Summer" is Christopher Willits' portion of the 12k compilation entitled "EADGBE", essentially functioning as it's own EP. This release followed "Folding, and the Tea" and predated the 7in "Little Edo".

"E*A*D*G*B*E's stunning centerpiece (is), seven related and connected tracks by San Francisco composer Christopher Willits called "Seven Machines for Summer". Willits' technique is to sample a number of plucked single guitar notes and then arrange them into pieces with relatively light processing. "The Baroque Machine", for example, consists of computer-assisted guitar runs, Takemura-like clicks, and what sounds like organ but is probably processed feedback. His rapid and repetitious style owes something to classic minimalism (occasionally I'm reminded of the Reich piece "Electric Counterpoint", written for Pat Metheny), but Willits' method is more overtly melodic and pop oriented. It's immediately catchy and emotionally engaging.

Willits occasionally has a passage in "Seven Machines for Summer" that could have been played by a live guitarist, but that would have been boring. Instead, there is a stiffness and slightly "broken" quality in his digital arrangements that inject a pang of melancholy to feelings of joy. His tracks move gradually to the climax that is the almost painfully gorgeous "The Fall in Love Machine". This finale reprises the theme of "The Baroque Machine" but fleshes it out into a chattering musicbox symphony. Finally, after his seven-track series, Willits closes the compilation an unrelated short piece called "Champagne and Soda", a darker piece with an almost industrial texture. Had Willits put "Seven Machines for Summer" on its own EP, it would have been one of my favorites of 2003."
- Mark Richardson

Instrument relatives of the guitar can be traced back as far as the 3rd century. Many adaptations were made to the interface over hundreds of years: 3, 5 strings, coupled strings, no coupled strings, 6 strings, always changing with technological advances in instrument craft, new materials from overseas locations, and selective pressures brought upon by musical fashions of the day.

The 20th century mixture of guitar + electricity (pickups, amplifiers, processing circuits) changed music as we know it. The 21st century guitar, still cousin to the third century Arabian ‘ud, can now be seduced by personal computers and software tools. The old stringed melody-maker, re-sonified and exploded though do-it-yourself digital signal processing, has assumed yet a new form of assemblage and mixture with modern technology. Suddenly the 6 strings seem refreshed, and open to a new notion of guitar music; a music generated from vibrating strings meshed with software processes.

12k embraces this idea by presenting four artists* who create contemporary sonic hybrids of guitar and digital processing. E•A•D•G•B•E is by no means trying to be a definitive voice of these practices, but rather a sound focused through the 12k filter of minimalism and subtle textures.

The title, E•A•D•G•B•E, comes from the root tunings of each string on a
6-stringed guitar.

All guitar and processing by Christopher Willits.
Published by Overlap Music (ASCAP).

Artist, musician, guitarist. One of the most diverse and prolific catalogs in ambient music, including collaborations with Ryuichi Sakamoto, and Tycho. “I believe that music and art can catalyze inner change, and those changes within ourselves can influence changes in the world”. Also the director / co-founder of Envelop, uniting people through immersive listening experiences
envelop.us ... more