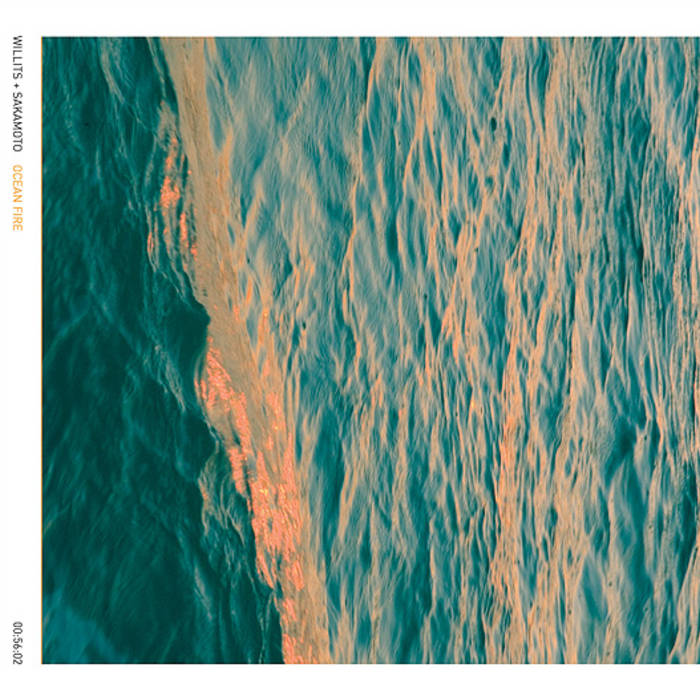 none of your goddam business

Christopher Willits and Ryuichi Sakamoto's new release, "Ocean Fire", is a sublime soundtrack for the ocean. It is an intense and stirring wash of cascading tones and textured harmony. Willits + Sakamoto surprise with rare form in this collaboration, creating a sound world unlike anything they have produced previously. Each artist has gently pulled the other into new sonic territory. Sakamoto's gorgeous processed piano sound reflects beautiful shimmering clusters of notes, a new aspect of Willits' pioneering guitar/computer approach. Together, their sounds merge effortlessly, creating seamless swells of gigantic melodic waves.

"Ocean Fire" was recorded live at Sakamoto's studio in NYC. The improvisations found their final form through some further editing in the months to come, and final mastering by Clayx in Berlin. We hear the artists exploring their relationship to each other, new sounds, and the ocean's boundless force and importance. This release is dedicated to the healing and restoration of our fragile oceans.

Sakamoto is a living legend in music. His numerous releases in YMO, and his grammy award-willing solo work has inspired two generations of fans and artists. Christopher Willits is an incredibly multi-talented artist who has shown he can do just about anything. In the late-nineties Willits began integrating his guitar playing with unique custom digital processing, and has since become instrumental in redefining the guitar in the digital age. Overlapping all forms of music, sound, and visual art, Willits' work defies genre distinctions while retaining a presence unto it's own.

Ryuichi Sakamoto has made a career of crossing musical and technological boundaries. A founding member of Yellow Magic Orchestra (YMO), Sakamoto has composed original scores for 20 films, including: Merry Christmas Mr. Lawrence and The Last Emperor , which earned him an Oscar and a Grammy. Sakamoto's recent releases include collaborations with Alva Noto ( Insen ) and Christian Fennesz, ( Cendre ). Sakamoto recently reunited with Yellow Magic Orchestra for one performance at Al Gore's Live Earth festival on 7/7/07 in Kyoto. Rolling Stone magazine called YMO's performance the best reunion of the global festival. Sakamoto is socially active, raising awareness about issues including the environment and anti-war efforts through projects including: Life, Zero Landmine , which raised millions of dollars for landmine removal, and stop-rokkasho , an evolving music and art project aimed at bringing attention to the dangers of a nuclear reprocessing plant which opened in Japan.

Christopher Willits has been instrumental in redefining the guitar in the digital age. Using custom-built software, Willits morphs his guitar playing into warm folded rhythms of texture and melody. Named “the center cell of a complex indie rock-avant-garde-electronic art Venn diagram in the Bay Area” (San Francisco Bay Guardian), and “The Picasso of Sound” (Tokafi Magazine), Willits defies genre distinctions while still defining a sound of his own. His guitar lines fold and weave into each other creating complex patterns of interlocking rhythm, melody, and texture. With over 15 music releases over the last 7 years, Willits's passion is obvious. 2006 marked the release of Surf Boundaries a critically acclaimed wash of Willits' guitars and vocal harmonies on the incandescent Ghostly International label. In addition to his solo work, a vast range of music collaborations, sound installations, and film/video projects compel him. His band project Flossin involves Zach Hill, Kid606, Nate Boyce, and Matmos, The North Valley Subconscious Orchestra is Willits and Brad Laner, formerly of Medicine. Other frequent collaborators include Scott Pagano, Taylor Deupree, and Ryuichi Sakamoto. Willits' numerous releases and collaborative projects cover a broad spectrum of musical styles, and include one main commonality: Willits' unique approach to the guitar and sound. Willits completed his Master's Degree in Electronic Music at Mills College where he studied with Pauline Oliveros and Fred Frith. Prior to Mills, Willits focused on painting, video art, and sound art and music at the Kansas City Art Institute. In addition to all of this, Willits recently founded and currently directs the emerging culture hub of releases, events, and sharing at Overlap.org.